What does EVERY party need?

Gotta give the people something to do when they’re enjoying their White Claws or whatnot.

Wife & I learned that trick a LONG time ago. Having people over for some drinks & a potluck is fine, but if you really want a party, you gotta have games and entertainment.

Almost everyone in Wisconsin plays cornhole. It’s probably the official state game at this point…and if not, I’m sure the legislation is on Evers’ desk.

Personally, I don’t enjoy cornhole. I know that’s probably sacrilegious to say, but I just never cared for it. I’d rather play ladder golf or Jarts.

At our annual outdoor bash, we have a ladder golf tournament for some of my “Morning-Show” money, and if Jarts were easier to find, I’d probably try to have a Jart tourney, too.

And if you’re looking for something new this year for your outdoor party, here’s a few suggestions:

I fell in love with this game at Rock Fest a few years ago. It’s easy to play, affordable, and a LOT of fun!

If you’ve never played Beersbee, it’s rather easy. You’ll need a couple of poles(6′-7′ PVC), some beers, and a frisbee.

Place poles approximately 36′ apart, or increase distance to increase the difficulty. Teams of 1 or more players. Place a beer on top of each pole, then throw the frisbee & try to hit your opponents pole or target to score points, with one throw per team & teams alternating. Each player must stay behind their pole at all times!

Scoring varies & you’re certainly welcome to establish your own scoring system. But, most games give you 2 points for knocking the beer off your opponent’s pole without them catching it, 1 point for hitting the pole, and 0 points for an un-catchable throw. Play to fifteen, win by two!

Oh, and it’s basically required that you have a beer in one hand while playing!

Another frisbee game you can add to your backyard bash this year is KanJam!

A couple of five-gallon buckets, a frisbee, some beers…and you’re set!

Now, you can buy officially licensed KanJam sets online or at Target/Walmart/etc….but they’re not necessary if you’ve got a little DIY-knowledge and don’t mind cutting a slot in your bucket

Set up your Kans about 50′ apart & choose teams(two teams of two players). Each team member stands behind the kans on opposite sides, and partners alternate between throwing and deflecting. Be the first team to score exactly 21 or hit the “instant win” slot!

Scoring varies a bit, but you can hit dingers, deuces, dunks, or done deals to score a victory. Click here for a breakdown on the scoring.

Another fun outdoor drinking game that requires a bit of an investment but is WELL WORTH it, is a giant Jello-shot Jenga.

Wife & I bought one of these a few years ago and it’s been a massive hit at our annual Backyard BBQ ever since. She’ll usually make about 200 Jello-shots leading up to the party, and they almost NEVER last the entire day. I bought the set for about $100 off Amazon, and if you run out of Jello-shots, you can just use Jameson or another booze of choice.

A couple of tips.

There’s a ton of other outdoor drinking games you can play at your big backyard party, including High Noon, Dizzy Bat, Washers, Flip Cup, and more.

Whatever you choose to play, make sure you’ve got a beer in one hand! 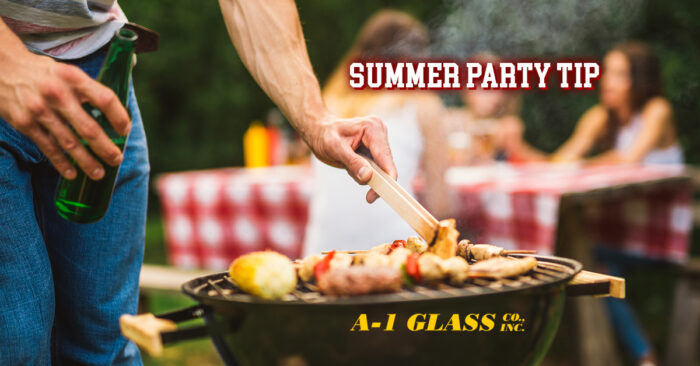