Freddy vs Jason vs Myers

I feel like this gets discussed every year, so I thought I would add my take and get it in writing once and for all. The classic question has existed since I was a kid in the 80’s. “Who would win in a fight between Freddy Krueger, Jason Voorhees, and Michael Myers?”

Straight out the gate, I’m going to declare a clear loser. Michael Myers. The biggest reason for this is his lack of actual supernatural ability.

I know, I know. Some of you are saying, “But, Bags, Myers gets real supernatural ability in Halloween: The Curse of Michael Myers. What about that?”

He does. But there is dispute even amongst the makers as to whether Michael’s supernatural abilities stay with him after this movie, or not. To complicate things much more, the Halloween franchise has faced reboots and retcons to all holy hell. Halloween: H20 ignores everything after Halloween 2, Rob Zombie never discusses the Curse of Thorn, and the new reboot ignores everything after the original Halloween, including the revelation that Laurie Strode is Michael’s sister that was introduced in Halloween 2.

I realize Jason and Freddie have had reboots and retcons as well, but the core parts of their character are clearly defined and static. They are both actual supernatural entities. Well, Jason gains his in Part 6. But once his supernatural element is introduced, it sticks for the story’s canon.

So without any truly defined supernatural ability, I have to count this as a strike against Michael. Even more, Jason has been shown to take much harder hits than Michael. The fight in the construction site in Freddy vs Jason alone shows Voorhees taking harder hits than Michael ever endured, and continues to fight and win that battle against Krueger. So I have to count Michael as being definitively out.

That leaves us with these two. We’ve seen them fight before on screen in Freddy vs Jason. Jason is declared the (sorta) winner in that incarnation, but not without huge asterisks that I can’t ignore.

First, the ending shows Freddy survive. This isn’t too surprising. As I mentioned above, we are now dealing with two legitimate supernatural entities that are seemingly impossible to kill. Second, Jason only wins with the help of the human characters in the movie, who essentially pick the lesser of two evils and help Jason. Without their help, Freddy was shown to easily manipulate and defeat Jason. This was just one battle in what could be a long war between two undead powerhouses. So, Jason won that battle, but who wins the war?

Listen, I’m a Friday the 13th mega-fan. I was team Jason for Freddy vs Jason, and as a kid, I always answered the question of this epic showdown with Jason. But now I’m an adult, and I have to give in to what I know is correct. Freddy wins this battle.

As the old saying goes, “brains over brawn”. Even if Michael wasn’t eliminated through lack of a clear supernatural ability, Freddy is still the smartest of the 3. When it comes to the long game, Freddy is the only one smart enough to eventually figure out how to dispatch his foes permanently. Both Jason and Michael have been shown to have some level of intelligence in their stalking, I doubt they have the ability to fully think through what it would take to permanently rid themselves of the other 2. Freddy definitely does. Freddy easily manipulated Jason, and could have defeated him if not for those meddling kids, and I have every reason to believe he could do the same to Michael without any problems.

What do you think? Agree? Disagree? Agree to disagree?
Fight me! 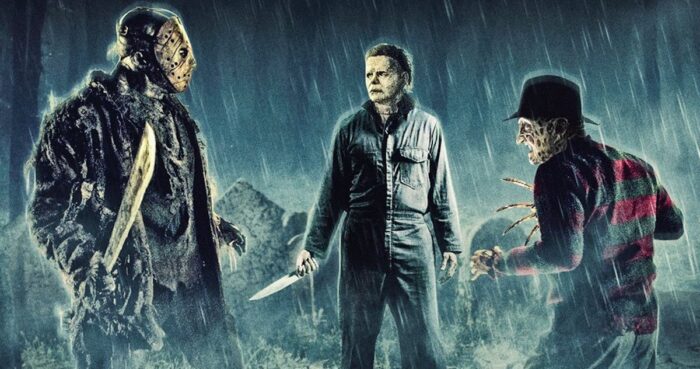