How To Be Ready For the NFC Championship Game

Which is on Sunday! I thought it was on Saturday all week! In my defense it’s been a crazy few nine months and every day blends into the next and if it weren’t for the snow on the ground I could swear to you it’s September. CHAMPIONSHIP SUNDAY! It’s a long blog so be sure to pause and take a beverage break if you need it. Here’s what beverage breaks are all about!

How do we get ourselves ready for the big day? There’s a few steps that I partake in that get me in the right state of mind for the game and I encourage you to do something similar to make this Sunday that much better.

Frist thing is you gotta remember that the game is on Sunday and not Saturday. Next step is much easier, you need to wake up. Don’t wake up too early though, that will lead to fourth quarter fatigue and that’s when games are won and lost. If you do wake up early don’t be bragging about. To quote a commercial for an insurance company I won’t name, no free plugs, “You woke up early, no one cares.”

Next up is fuel. Fuel for the mind and the body. Get to the kitchen and start cooking. I prefer a hearty breakfast of leftover brats and eggs. Wash it down with a full strength Bloody garnished with a beef stick and let’s get ready to get dressed.

Clothes are the second most important part of game day preparedness. I used to be vehemently against wearing jerseys but since I now own two I’m all for them. Get that baby on, make sure to have an undershirt on first otherwise the numbers will stick to your man boobs and it’s a bad sight. I have a pair of Packer Zubaz and they’re the most comfortable pants I own. If I could wear them everyday I would. Game day they are accepted and thusly will be the only leg garments I will wear. Kilt style.:)

Now that we are dressed, fed and anxious for football, let’s talk bevvy’s! Any ol Packer game will demand some form of frothy beers but this is the NFC Championship game! That means we pull out the big guns. Get to the store and find some tasty beers! Get that IPA! Get that Imperial Stout! Get yourself that Belgium inspired Tripel you’ve been saving for a special day! Whatever your favorite is just make sure you get it! I’ll be drinking some Pilsner Urquel and the Deftones beer. I’m gonna be hella hung over on Monday.

Now that we’ve got a good buzz going it’s time to find our spot in front of the tv. Is it a chair, is it the couch, is it the floor you weirdo, I don’t know where you sit all I care is that you are capable of celebrating with ease and quick access to run to the pisser when nature inevitably calls. If you get boxed in and have to crawl over someone to get out of the room you automatically have to get that person a new beverage, thems the rules.

Food is kind of important. It’s a long game and if you run out of energy by the fourth quarter I’ll be very disappointed in you. Make sure the spread has something from all corners of the mouth. My place will have chili with noodles, brats, fruit(because you gotta fight off scurvy even when the Pack is on) and ice cream. The ice cream will serve as a duel purpose emotional support. It’s there as a celebratory treat as well as a comforting friend if the Packers do the thing that starts with L and won’t be named in this blog.

So there you go! You’re ready, I’m ready, WE’RE ALL READY! Now let’s go Pack and let’s pray our heads don’t explode from the impending hangover. 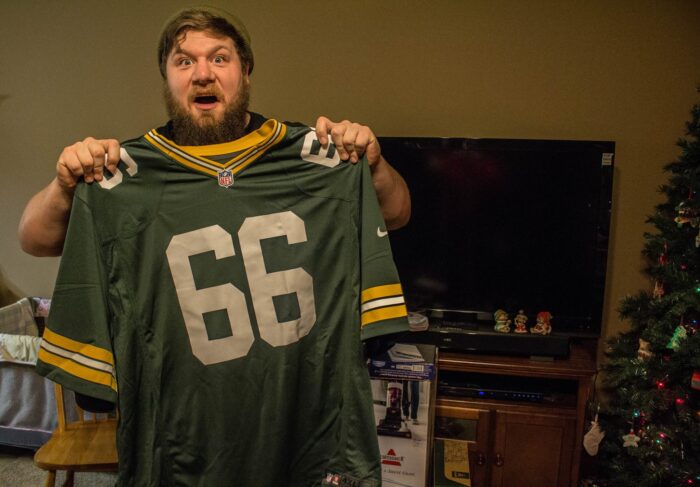