The Game of Thrones spin-off, House of the Dragon debuted last night on HBO. If you’re a huge Thrones fan, you probably had last night circled on your calendar. While future articles about this show will likely contain spoilers, we’ll keep this one spoiler free for all of you who are just catching on that this show was a thing. Because let’s be honest, the way Game of Thrones ended left a bad taste in a lot of people’s mouths. So if that caused you to toss away any excitement for future installments, I certainly wouldn’t blame you.
I’ll give a quick (spoiler free) rundown of the show’s premise, and then give you what I believe to be the “Goods” and the “Bads” of the show.

The show takes place about 170 years before the death of “The Mad King”, a very important moment in GoT lore. We are seeing the Targaryen family at the height of their reign. As we know from the events of GoT, they will begin to slowly fall from grace. After all, when you’re at the top, there’s no place to go but down.
We begin the tale with King Viserys 1, ten years into his reign. He’s in quite a pickle (of course), because he has no sons, and therefore no male heir to his throne. This is the main focal point of the show as of now. So let’s move on to the good and the bad after just one episode. I’ll start with the bad, because I like to end on the good. I like having something to look forward to.

The Bad
– They continue to use (and possibly overuse) the iconic Game of Thrones theme song. I get that this is a spin-off, and that they want to make nods to the original. But there’s a difference between nodding towards the original, and attempting to ride it’s coattails. This feels like the latter.
– I was hoping to see more comic relief. One thing the original series excelled at was not forgetting to have fun, and create some funny/enjoyable moments, even in episodes where the rest of the plot is grim. They didn’t forget to have fun. Hopefully we see some of that with this series. But as for now, it’s been dead serious from the opening credits.

The Good
– Milly Alcock as young Rhaenyra Targaryen is completely stealing and running away with the spotlight. She portrays the character as a beautiful and intelligent young woman who is confident, but simultaneously nervous and unsure of her ability to weather the storms ahead. It’s been a mixed bag of emotions tossed at her, and she’s completely slaying the role.
– Matt Smith is also killing his role as Daemon Targaryen. He’s sadistic and easy to hate, but you strangely wanna see him succeed just so you can hate him more. He’s brilliantly handling this role.
– The show clearly has a “later seasons GoT” type budget, and they’re absolutely dedicated to using every penny of it.

So there you have it. I’m a fan, at least so far. I look forward to talking more about this series in the weeks, and hopefully years to come. Still not sold? Check the trailer below.
I mean, who doesn’t love a show with dragons and bewbs? 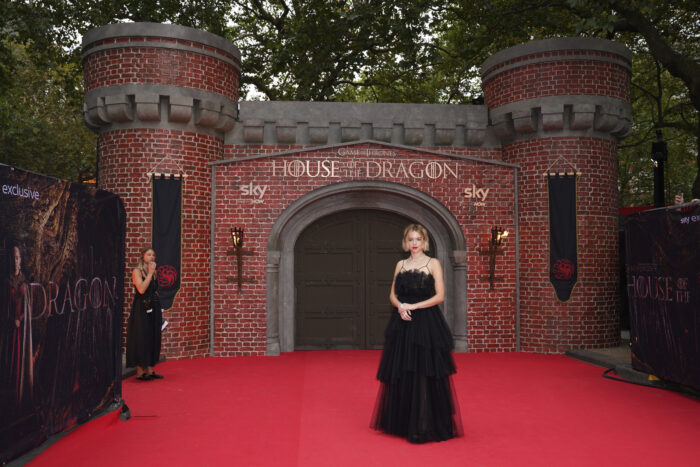