You’ve probably heard by now that Bruce Willis is stepping away from acting after being diagnosed with aphasia.

According to John Hopkins, aphasia is: “a language disorder caused by damage in a specific area of the brain that controls language expression and comprehension. Aphasia leaves a person unable to communicate effectively with others.

Many people have aphasia as a result of stroke. Both men and women are affected equally, and most people with aphasia are in middle to old age.”

Sad day. I love watching Bruce Willis in movies. Yeah, I know he kinda plays the same character in a lot of his movies, but if Bruce is in a movie, I’m probably going to watch it.

That being said, not all of his films are winners. I’ve made no attempt to hide my dislike for all the recent “direct-to-DVD” movies that have come out over the last few years/months.

And now, it seems we have an explanation as to why that’s been happening. I’ve tried watching most of those films, but some of them are so bad, that even the great Bruce Willis can’t save them.

Number One is OBVIOUSLY “Die Hard”. If this isn’t the #1 Bruce Willis movie on your list of his top films, you’re wrong. It’s everything you want in a Christmas/action film. Tons of one-liners, that buddy-cop relationship that makes you tear up, a damsel in distress, the idiot police chief/FBI agents, plenty of blood & gunfire….it’s a perfect movie.

Number two for me is “The Last Boy Scout”. Yeah, you could say this is a blatant rip-off of his John McClane character, but I feel like Joe Hallenbeck is a much darker version, and having Damon Wayans as his sidekick in this movie allows Bruce to be a bit funnier than he was in the original “Die Hard”. Also, ALWAYS take gut over head.

Number three on my list of the Top Ten Bruce Willis movies is another obvious choice….”Armageddon”. He saves the fucking world. Is there anything else you need????? Plus, he finally reconciles with the guy who’s bangin’ his daughter and the emotions at the end of that movie are almost too much! In a movie with a MASSIVE cast of incredible actors, Bruce shines brightest. Without him, that movie would have sucked.

Number four on MY list…is “Hudson Hawk”. I know, I know. Not his best film. But for some reason, I really enjoy the film. Maybe it’s the interesting candy-bar criminals? Maybe it’s the singing? Maybe it’s the skateboard? Whatever it is….I like this film so much that I put it in my top 5 Bruce movies.

Number five for me is John McClane on the river. Yes, “Striking Distance” is my number five Bruce Willis movie. He’s got the bum leg, he’s got a sweet houseboat and he gets to sex-up SJP in that red dress!

Number six on my list is “The Fifth Element”. What’s better than saving the earth? How about saving the Universe? Because if you think Mr. Zorg & Evil were going to stop at destroying our planet, you’re kidding yourself. Thankfully, Korben Dallas is here to save the galaxy. Bruce gets a chance again to be comedic and a bit silly at times while still holding on to that bad-ass tough guy we all know & love. Plus, he lives at the end & gets the girl.

Number seven for me is “RED”. Another great cast with Morgan Freeman, John Malkovich & my lady, Helen Mirren….and Bruce is once again the lead. He’s the calm/cool/collected retired black-ops badass who’s always a step ahead. The only problem with this movie is that they made a sequel.

Number eight on my list is “Pulp Fiction”. This movie once again has a MASSIVE cast, and for the first time on my list, Bruce isn’t the most important character. But he is the coolest. Can’t go wrong with a guy who chooses a samurai sword over a chainsaw….and he rides off into the sunset on a pretty badass chopper. But, he’s also sensitive enough to know the value of some blueberry pancakes.

And number ten on my list is “Cop Out”. Again, he’s basically playing John McClane in this movie, but they break the fourth wall, which I personally enjoy, and adding the hilarious Tracy Morgan as his sidekick allows his character to shine that much more. 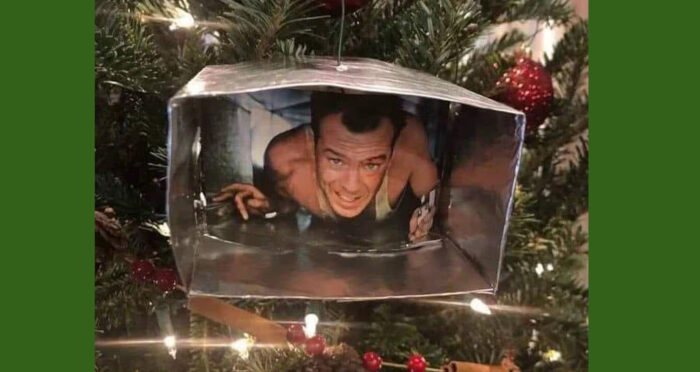