HA! Jason Bateman! Too funny! Ok, if you grew up in the 80’s, commercials for this cereal were on like every ten minutes. Totally inescapable. And honestly, I remember it being pretty tasty, and it was one of the few “sugar” cereals that my parents would buy.

We were usually stuck in the world of Cheerios, Shredded Wheat, Raisin Bran, and occasionally, Cinnamon Life when the ‘rents decided we were good enough for a breakfast ‘treat’ – We also always had some type of Oatmeal (gross) or Cream of Wheat (also kinda gross) but we had a secret weapon.

We would totally drown our breakfast cereals with heaps of sugar to make these cereals even slightly palatable, making our parents’ guard-dogging of our breakfast health, completely moot. After me and my brother fessed up to this, our mom actually relented, and bought us some damn Froot Loops.

Anyway… for some reason they thought Golden Grahams were, at least, somewhat healthier. Maybe it was the honey. Apparently in the 90’s General Mills stopped using honey as a sweetener, and started using the cheaper corn syrup instead. It nearly killed the brand. People hated it.

I was honestly surprised to even see it at the store. I didn’t know they even still made it. So yeah. I bought a box of Golden Grahams. Now I’ll have to double-check to see if they went back to honey.

I’ll let you know if they’re still any good. 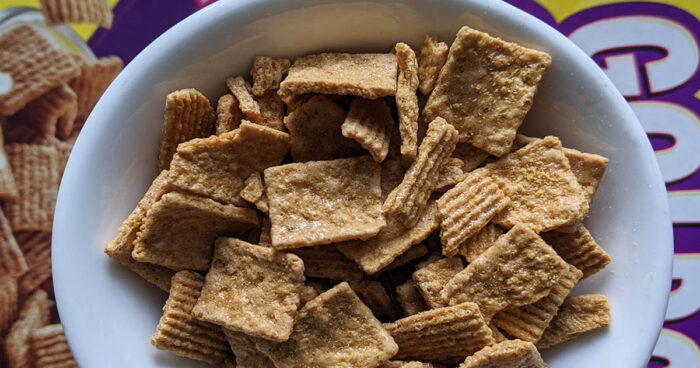