My recap of my recent test rides.

In case you didn’t catch the video on our Facebook page, I’m going to be test-riding a few different Harley-Davidson models over the next few weeks thanks to my pals at Great River Harley-Davidson in Onalaska.

When I took the Harley rider course several years ago, I learned to ride on a Street 500. At the time, I really liked the bike because it was lightweight, had a simple design, and was the kind of bike I was looking for. Something simple to get around town, to & from work, and to learn on.

I felt very comfortable riding the bike at first, and thoroughly enjoyed it for about three years. I always felt that bikes like a Street Glide or Road King were too big for me. But after three years of riding the Street 500, I was definitely ready to move up a size or two to a bike that had storage, a passenger seat, and a windshield!

So, about three years ago I went in to Harley & test road several bikes & settled on a 2008 Road King. It’s a police-style bike with the hard-sided bags, heel/toe shifter, cruise control & parade mode(which I REALLY dislike).

The wife & I have enjoyed riding it for the last few years, and now it’s time to once again think about getting something different now that our needs have changed a bit.

I’m looking at something with a touring package, fairings for better hand protection, and a radio, of course!

But since I’ve only ridden two styles of bikes in the last several years, Brody & I thought it might be good to test ride several styles to see what I like & how the different bikes feel.

The throttle response was fantastic, especially in 2nd & 3rd gears, and I really liked the bag style. I’ve currently got the hockey puck style and these bags had the lever on the lid, making them much easier to open & close when you’re at a stop. The touch screen was extremely convenient with controls on both hand grips. The wind was definitely an issue at high speeds, but a different windshield would certainly help with that.

It was extremely comfortable to ride & made bumps & rough roads feel smooth. Surprisingly quiet and fun to ride!

The Street Glide Special comes with stretched saddle bags, the Milwaukee-Eight 114 engine, ABS linked brakes, the sweet radio with touch-screen infotainment system(more on that in a bit), the EXTREMELY bright Daymaker head light, and comes in Vivid Black, Black Jack Metallic, Billiard Red, Gauntlet Gray Metallic, or the two-toned Gauntlet Gray Metallic/Vivid Black, or the BEAUTIFUL Arctic Blast(which they have at Great River HD). Plus, you can choose between chrome or black finish.

This bike was a bit throatier than the standard edition, and definitely offered more giddy-up with the bigger engine. You can get it to 60+ MPH in 2nd gear and still have some left before needing to shift. The black finish on the engine case was slick-looking, and the slightly bigger bags offer more storage & look really awesome.

The real treat with this bike is the infotainment system. It works with bare hands or when you’re wearing gloves, and has a built-in navigation system & TPM!

It’s the tire pressure monitor, of course! In all the years I’ve ridden, I’ve never actually checked my own tires with a gauge. And this infotainment system does that for you, so you can stay on top of your tire pressure & help prolong the life of your rubber!

The other thing I really liked about the Street Glide Special was the wind deflector had a slight curve at the top of the plastic that helped push the wind over my head while riding, making it much more comfortable. Obviously these are fully customizable!

I had a blast trying both bikes & I’m really looking forward to what Brody has in store for me this week! 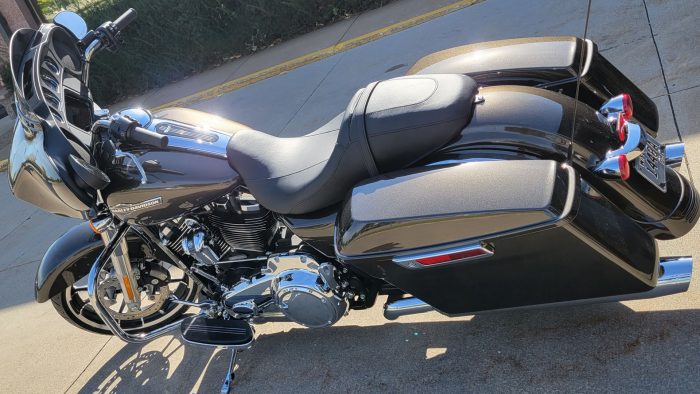