Summer Party Tip – Advice from me!

Every year(except for last year), the wife & I host a rather large gathering at our house.

We call it the “Backyard BBQ” and it started almost 15 years ago when we were still renting an apartment.

The first year, it was just a few friends in our backyard, have a few beers and eating some chips and dip. But when we moved into our first house, we decided to go a bit bigger each and every year. More food, more beer, more games, more people, more shenanigans…more of everything.

And here’s a few things I’ve learned in the years we’ve been hosting this party.

Make sure you’ve got plenty of shade. Thankfully, we’ve always had a 10′ x 10′ canopy of our own, and borrowed another from the radio station. But the real important piece of the puzzle comes from my buddy, Eric. He’s got a 20′ x 10′ canopy that we’ve had at almost every party and it’s been a MAJOR life-saver some years.

We host the party in late August, so it’s usually plenty hot & sunny, so having shade is extremely important. And, if the weather decides to take a shit & rain on us, we’ve got some protection!

Having a ton of camping chairs to go along with some other patio furniture is also a major plus. We usually ask people to bring a chair with them, but some people don’t. So having plenty of chairs makes everyone comfortable.

The first couple of years, we only had one porta-potty to go along with the bathroom in our house. Then, when the party started getting bigger & more people were attending, we upped that to TWO porta-shitters. It helped ease the stress on our pipes, and alleviated some of the traffic in the house.

We don’t have kids. We don’t want kids. I don’t mind if one of my friends stops over very briefly with their child, but this is an adult party. We drink. We talk a lot of shit. And the last thing I want is some kid running around, listening to us curse up a storm and be drunken idiots.

Five: Provide people with something to do.

Over the years, we’ve added several things to the party, including the annual “Ladder Golf Tournament” for $100 of my Morning-show money. We’ve had live music from Derek Ramnarace, Andy Hughes, Scooter Jibs, Kaleb Michael, etc. Just a few years ago, we added a giant Jello-shot Jenga and brought in the WILDLY successful karaoke. Making sure the guests have something to do during the day is just as important as anything else!

When you have a bunch of people over your house for a summer bash with a lot of food, you gotta give them plenty of places to toss out their garbage. One of the first years we had the party, there was trash EVERYWHERE afterwards and it took me all damn day to clean up. Since then, we’ve had several large garbage barrels with lids to help lighten the cleaning load the following day.

Seven: Make sure you provide some non-alcoholic beverages.

Me? I drink beer & Jameson. Most of our friends come over and have some adult beverages. But, there are people who don’t drink, and over the years, I’ve learned that to be a gracious host, you should provide some water, soda, juice, etc. for those that don’t imbibe.

So there ya go…..a few little tips from my years of experience hosting a rather large gathering at our house. 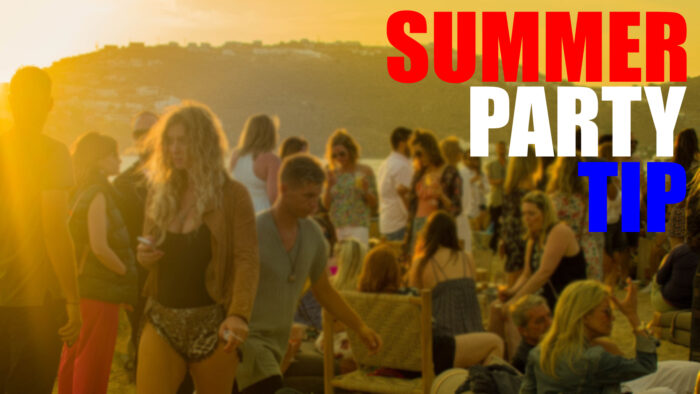