Why are they called Mules? It’s not what you think. Sure, they tend to have a kick with the alcohol content, but that’s not why. Pints with Puck today goes to the copper cup instead. And why copper cups, anyway?

OK first let’s talk about the Cutwater Vodka Mules. They are super portable, completely delicious, and I’m a complete idiot, because I forgot to grab a copper cup from home, so I had to use a regular glass…. wait a tic

Never mind. I’m going with a party cup and ice. This is all about being easy, and portable, and convenient for outdoors and coolers. So anyway, listen to the review. I really like these things:

Back to the whole drink history thing… Both California and New York claim the invention of this drink, but since they were making them in NY for 2 years before… and even though they became immensely popular in California… New York gets the nod.

They used “Moscow” for the Vodka. The guy who owned the bar that created the Moscow Mule, owned Smirnoff.

They called it a “MULE” because of , you guessed it… the KICK. But the kick of the Ginger Beer, not the potato liquor. BTW? Nearly all vodka was potato based, not grain based back then, and it reportedly tasted terrible.

The copper mugs were just a happy accident, and customers liked the look. Plus the bar where it was invented had the proverbial boat-load of them in their basement.

Anyway… I dig these things. We have a friend who LOVES mules. She always brings all of the ingredients with her for parties and such. Even though I keep telling her that I have the ingredients, and would happily mix some up for her… she still does it.

Now this is a much better way to enjoy a delicious mule, without packing up half of your bar. Just grab a few cans, I’ll supply the party cups and the ice. Just not red ones. We have a history… but that’s another story.

Find Cutwater Spirits Vodka Mules and other real mixed drinks in a can at your favorite liquor department today. I got mine at Woodman’s 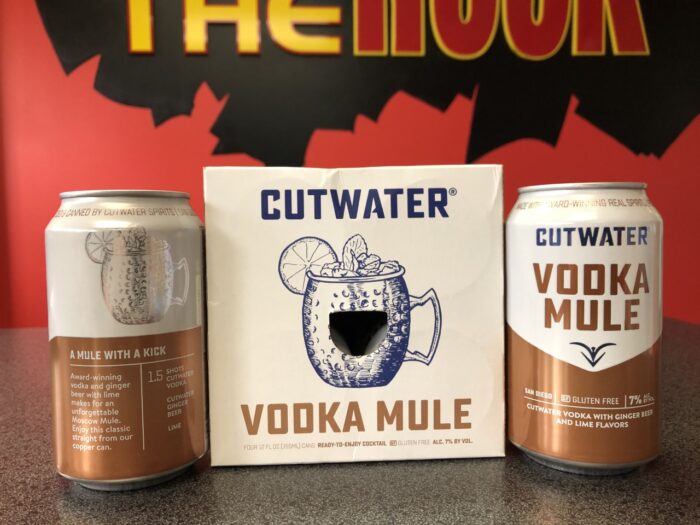