If you are ever on Chopped. Never make risotto. Just don’t. You will LOSE

Between the basketball games last night, I flipped over to Food Network, and was watching CHOPPED. Immediately started yelling at the TV: “YOU CAN’T MAKE RISOTTO IN 20 MINUTES!!!”

Yet over and over again, some $#@%$#@ thinks that they will be the first one to pull it off and amaze the judges… but guess what always happens?

It’s like they’ve never even watched the damn show!!! It’s happened 247 times out of 600+ episodes over the 12 year run of Chopped. I counted. (actually I really didn’t count… but it’s a fair estimate)

Now before you start saying: “I saw this one episode when….”

STOP. Yes. It HAS happened. Risotto makers have moved on to the next round. Because someone else made some monumentally stupid thing to overwhelm their nasty undercooked rice. (or forgot a basket item)

AND. It always comes up later in the final judging… Mark Murphy will ultimately say: “yeah, but he served us that terrible risotto” or Guarnaschelli will utter: “that risotto was incredibly undercooked”

And there you have it. You go home. All because of risotto.

Now, I nearly lost my mind later too… at the half of the Michigan/UCLA game, I flipped back to Chopped, and here’s some jackwagon making a soufflé in the desert round!?! ARE YOU KIDDING?!? A soufflé

It was ridiculously under cooked. Never set up. Raw batter in the middle.

Why? Probably because his competitor made risotto

Puck can cook. He loves risotto. He also knows that you should never try to make it in a cooking competition. Check out Puck LIVE 10:00-2:00 weekdays.  Listen Here 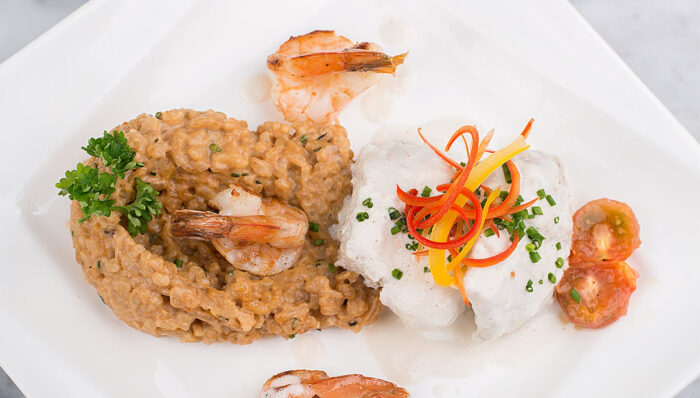