Am I going vegan?

If you know me, then you know I’m a meat eater.

But the other day, when I was shopping at Festival, I came around the corner of the ketchup aisle and right on the end-cap was a display of these beauties.

They’re made by Harvest Snaps, the same people who make the Green Pea snack crisps.

We’ve had the snack crisps in the past and they’re okay. A bit light on the seasoning, but a “healthier” alternative to munching on an entire bag of chips.

But the other day, these new “Crunchions” caught my eye. Mostly because I thought they were some kind of onion-ring snack, kinda like a Funyun.

Without even reading the packaging, I tossed a couple bags in my cart & finished my shopping. Later that afternoon, as I sat down to do some work on my computer, I opened the bag of the sour cream & onion flavor and was instantly surprised with how good they were!

What the hell? I’m not supposed to enjoy vegan food!

Also, they’re not even made from onions. They’re made from red lentils and they’re friggin’ DELICIOUS!

My fat ass ate the entire bag in one sitting.

They come in three flavors including “Kick’n BBQ”, “Sour Cream & Onion”, and “Tangy Sweet Chili”, and the sour cream & onion were by far my favorite of the three.

All I know is I’m so conflicted about this whole thing. Snacks are supposed to be bad for you. Salty, sweet, delicious! But these things aren’t terrible for you.

Just 130 calories per serving(390 in my case since I ate the whole bag), and zero trans fat or saturated fat. Plus, no cholesterol.

So, if you’re looking for a delicious and somewhat “healthy” snack, I suggest giving these bad boys a shot.

And then follow it up with a few strips of Bacon just to make sure you’re not going vegan. 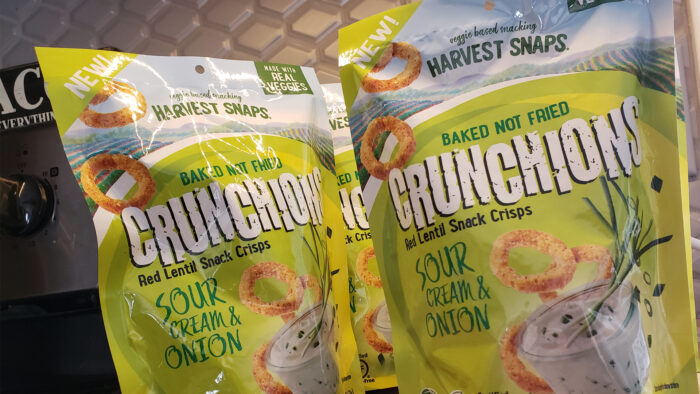