Socks? Seriously. They don’t really disappear. You just get them mixed-in with other laundry or forget one in the dryer. What I want to know is: Where are all of my hair ties? I just bought some and I can’t find a single one. #ridiculous.

Two weeks ago, I purchased a 40 pack of black hair ties… OK. It might have been 3 weeks. But still.

THEY. are all. GONE!?!. WHERE THE HELL DID THEY GO?!? If I am using a hair tie… I put it on… and remove it later. This isn’t frickin’ nuclear physics. It’s a damn rubber band.

After use, the hair tie is taken out and put in one of two places… The nightstand next to my bed, or a hook on the wall by the mirror in the master bathroom. That’s it. I don’t put them anywhere else. Yet I can never find one.

Is there is some damn rubber-ring-gnome living in my house that I am unaware of? They sure as hell ain’t biodegradable, so it’s not like they disintegrate before the next morning…

I’m seriously confused. We don’t have a cat, so I can’t blame it on that. BUT there ARE two girls in my house, although both of them swear… with all of the sincerity they can muster… that THEY aren’t taking Dad’s hair ties.

Yet? Once again. Here we are. I just grabbed another pack, and will crack that Oscar this afternoon. Maybe one of the pink ones if I’m feeling fancy. We’ll see how long they last. (I’ll update this story when they all disappear… so, let’s say, end of December?)

Puck has had long hair for most of his life, and has probably killed numerous rubber tree plants trying to keep it out of his face. Helluva way to treat the planet, but damn, if he don’t look good. Check out Puck LIVE (from his daughters bedroom) during the pandemic from 10:00-2:00 weekdays. Listen Here 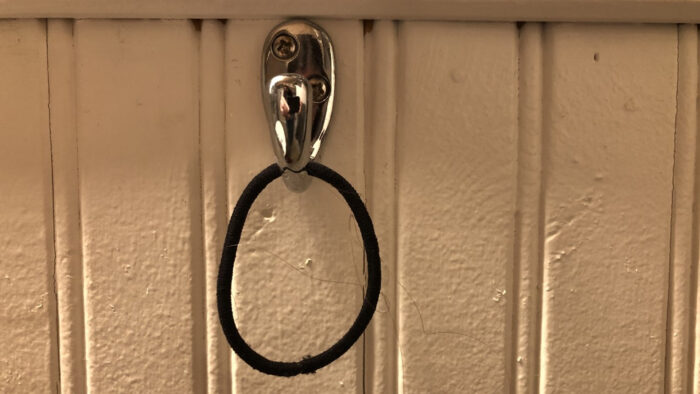