Our trip to the ‘Boo!

When the wife & I decided to do a “Stay-cation” this year, we talked about some day-trips around the area to check out some of the things we’ve never seen/done.

Normally, we’d be up in the Iron River area at a cabin with the dogs, but with the whole ‘Rona thing, we felt better staying closer to home.

One of the things we really wanted to do on our Stay-cation was get to Baraboo for Gem City Saloon‘s legendary pizza. We’ve never been there, but we have many friends that are from that area who constantly rave about it!

As we typically do, we also researched any breweries in that area before heading out. We’ve been to Port Huron in the Dells, and we were happy to see there were a couple of breweries right in Baraboo.

Our first stop was to the newly opened Al.Ringling Brewing Company! This building is AMAZING! It’s part of the Ringling mansion and has a really cool bierhall feeling along with plenty of space for social distancing. They also offer tours of the mansion, but we were in a bit of a hurry so we’ll have to do that next time.

Sadly, they only had three of their own beers on tap at the time, but we were able to enjoy the flight that included their Kölsch, Hefeweizen, and their prohibition ale…and we added an Oktoberfest from Lake Louie(they had several other guest taps). Our beertender said they were working on getting more of their own beers on tap, including a coffee porter that appears to be available now.

They do have a kitchen at Al.Ringling Brewing Co., but we didn’t try any food as we were saving our appetites for Gem City. But I did scope a GINORMOUS pretzel making it’s way to another table and it looked & smelled PHENOMENAL.

We’re definitely looking forward to going back to the Al.Ringling Brewing Company when they have more of their own beers on tap so we can sample them, take the mansion tour, and try some of the delicious-looking food.

After our stop at Al.Ringling Brewing Company, we took the quick drive to Tumbled Rock Brewery. This place is also brand spankin’ new and has a really unique indoor/outdoor setting with a brewery on one side, the kitchen on the other side and a big outdoor patio wedged in between.

The patio has firepits, plenty of seating, cornhole boards and is dog-friendly. The wife said it was a bit too chilly to sit outside, so we went into the restaurant for service. They’ve got a big fireplace right by a chill area with a couch and some comfy chairs…plenty of tables and seats at the bar.

Because it’s a brand-new place, it has that “trendy” feel to it. Personally, I prefer something with a bit more age & character, but it’s still a really cool place that I’d visit regularly if we lived closer.

Not just beer on the menu, either. They’ve got a decent sized drink program as well. They had about a dozen of their own beers on tap, and we opted for a flight that included their “Teufelssee” Oktoberfest, their “Barrel o’ Beans” coffee brown ale, their “Nitwit” belgian witbier, and their “Chuck Brown Dog” English Brown ale.

As with our previous stop, we saw some of the food coming out of the kitchen & it looked great. They’ve got some bison sliders on the menu that will certainly be my choice when we return to Tumbled Rock in the future.

Our final stop was a quick one. We called ahead to get our pizza to go from Gem City Saloon as we had to hit the road to get back to La Crosse. It’s actually just a bar with a couple of pool tables and some seating…not your traditional pizzeria. But the pizza itself was fantastic. We payed $26 for the large deluxe and it was worth every penny!

It’s massive, so make sure you’re hungry! Crispy on the bottom, heaping with freshly-cut toppings, warm & doughy in the middle with just the right amount of sauce. 10/10!

There’s also a couple of wineries in the Baraboo area, so if you’re looking to make a weekend out of it, that’s totally possible! 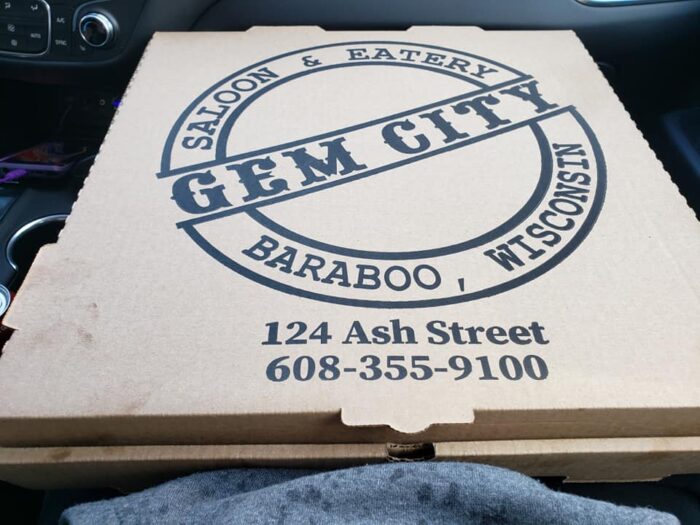