People always think of Fall as the season for horror movies. Not that it isn’t for a good reason. Many horror movies take place in Fall, are released in Fall, or are legitimately set specifically around Halloween. Certainly makes sense enough to me, and I absolutely enjoy that season. But people forget that Winter is a great time for horror as well. The cold, the isolation, and the constant darkness make for a fantastic horror setting.
With that in mind, here are my top 3 horror movies with a Winter setting.

No list of Winter horror movies would be complete without mentioning this absolute gem. Hell, even John Carpenter himself called this his favorite of all of his movies. This movie really uses the bitter cold and feeling of isolation to it’s advantage along the way of giving a movie so good, it’s stood the test of time. Some even say it’s scarier now than it was when it was originally made.
Fun fact, if you speak Norwegian, the movie’s beginning is given away. As the Norwegian man chases the sled dog (that we later find out is actually the Thing), he’s shot in what seemed to be self defense. Before he’s killed, he shouts at the men in Norwegian. They perceive it to be a threat, but it’s actually a warning. He shouts, “Get the hell out of there! It’s not a real dog, it’s some sort of thing!”
This scene is not subtitled on purpose for American audiences, but Norwegian people had an early heads-up.

People forget that much of this film takes place in Winter because unlike most other movies I could have considered for this list. But it’s considered a Winter movie none the less, and it’s one of the best movies of all time. It features an all star cast, and probably Gary Oldman’s best performance, which is saying a lot coming from him.
Fun fact, depending on your religious feelings or affiliations, Keanu Reeves and Winona Ryder are actually married because of this movie. They brought in a legitimate Romanian priest to perform the wedding in the film. Despite the fact that they were acting, the priest still said the words and went through the same motions he would have had it been real. Keanu and Winona still joke about it to this day.

Come on, you had to know this would be number 1. Winter plays a lead roll in creating the isolated feeling as Jack Torrance slowly slips into madness with a little supernatural help. It’s also the means of his demise in the end.
This movie is an absolute masterpiece from the start, to it’s cliffhanger finish.

I do have mixed feelings about this movie in today’s world because Stanley Kubrick legitimately put Shelly Duvall through hell to make this movie, and did so intentionally. He was always a stickler for realism, but this time he went too far. He purposely treated her poorly to break her down mentally, driving her to the brink of madness. She never really recovered from it. Every expression of terror you see from her in the film is real.
Turns out, the real villain of the movie was not the ghosts of the hotel, or the Winter cold, but Kubrick himself.

What do you think? Got any other Winter themed horror movies you’d love to add to the list? I know I left out some great ones. 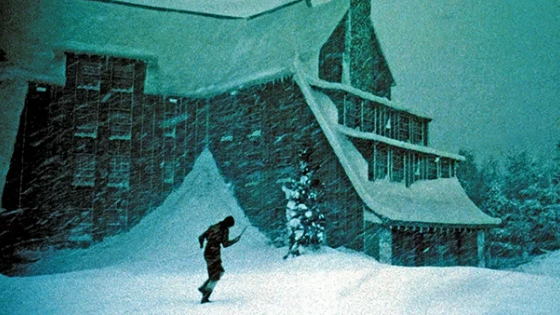 95.7 The Rock's nerd of all trades. I love video games, nerdy fandoms, and sports (Packers/Badgers/Brewers/Blackhawks). Husband and father of 2. I'm also a huge pro wrestling fan and master of 1,001 holds. Hold #1: Armbar ...
Scroll To Top