The Coulee Region got a visit from a true great. The 16 time World Champion, Ric Flair, made an appearance at Champions Riverside Resort for the Gravedigger Slamathon. Put together by Gilbert Brown, with some help from our local wrestling promotion, RCCW, this awesome event raised money for the Steve “Mongo” McMichael Scholarship fun in association with the Gilbert Brown Foundation.

Unfortunately, Steve McMichael couldn’t make it due to health reasons. We, the faithful of the 4 Horsemen, wish him all the health and wellness he can have, given his current state.

I, myself, didn’t opt for the meet n greet passes. Simply seeing the man in the building was enough for me. My cousin, however, opted to get our poster signed. A few years ago, me and my cousin made a chili for Chili Fest inspired by the Nature Boy called, “Things That Make You Go Woo” Carolina BBQ Chicken Chili. It faired well in the contest, and got us another award. But now having our sign autographed by The Man himself, brings a smile to my face like no other.

After a short speech, and many a “WOO” screamed by him and us fans, it was time for some RCCW action. I had the pleasure of not only witnessing some awesome local talent, but got a chance to hang out with them as well. Including 2 former RCCW Champions, AC Riley and Skitz.

But the moment of my life happened shortly after the following picture was taken. Ric and Gilbert were signing some last minute promotional items to auction off just feet from my group. So I snapped this picture. Seconds later, the Nature Boy himself walked right past me. I didn’t reach out for a handshake or to touch him. I wanted to respect his space. But I couldn’t help but say just one sentence…
“Thank you, Ric.”
He looked up and made eye contact with me, and to my face said, “No. Thank you.”
This man has always been grateful for his fans, and that’s why we love him. To him, my voice was but mere 1 in a trillion who have said that to him. But to me? I was acknowledged by a jet flyin’, limousine ridin’, kiss stealin’, wheelin’ dealin’, son of a gun. And nothing has ever felt better.

I did take a few pieces of video from the event you can check out from our sister TikTok page, Around River City. Check it out below. 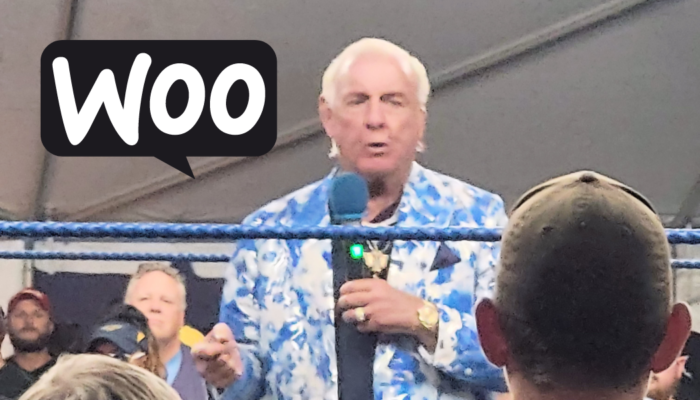