After taking a week off from my test rides at Great River Harley-Davidson, I was back at it this Tuesday, taking a few different bikes out for a spin.

After riding for a bit, we swapped and headed back to the store.

Both bike were fun to ride if you’re into the smaller, more sporty bikes. The XL 883 comes with the 883 Air-cooled V-Twin, ABS, and a cool, blacked-out look. The XL 1200 has the bigger engine with mini ape-style handlebars and a cafe inspired design.

Plenty of power to get around town & out into the country with a simple design and really responsive handling. Having stubby legs like mine makes these smaller bikes great because I can finally put both of my feet down completely on the ground when I’m at a stop light.

The bikes are also EXTREMELY affordable, so if you’re a new rider, or if you’ve got a GIANT touring bike but you’re looking for something small & fun to get around town, either of these two would be a solid choice.

Next up was the 2021 Sportster S and if I’m being completely honest, I was EXTREMELY scared to ride this bike.

I enjoy riding. I crank on the throttle every once in awhile, but I’m not trying to break the sound barrier when I get on the Harley. And this bike is DEFINITELY meant for someone who enjoys speed.

It’s got a massive Revolution Max 1250 121 horsepower engine with 94 ft/lbs. of torque. Dumping the clutch when going from 2nd to 3rd is like liftoff from Cape Canaveral.

It’s got a small chassis but is bigger than the Iron bikes I rode earlier in the day, and the Sportster S comes with a bunch of great features including cruise control, ABS, traction control, RDRS, bluetooth capability & more.

And again, like the previous bikes, it’s very affordable if you’re looking to get on a new bike.

I really got on it in third gear and was easily doing 70mph on a straightaway. The turns were a bit difficult to manage with the massive front tire, however. It would take some getting used to since it’s much bigger than the front tire on my Road King.

I liked the fact that it felt more comfortable riding than the Iron bikes, with my legs more comfortable. The shifting is very soft, and it’s easy to lose track of what gear you’re in…but I was having so much fun I didn’t really care that much.

If you love speed, you MUST ride this bike. It’s wild.

Last but certainly not least, I took another 2021 Street Glide out for a spin, this time it was the Limited. Like the previous touring bikes, it had the amazing info-tainment center, but additional speakers added to the great stereo system, and the heated handgrips were incredible.

The seat is extremely comfortable with a nice curve that I was able to push my butt into & allowed me to sit up straight, rather than slouch over like I normally do.

Did I mention the heated handgrips?

Definitely need to get the wife on the bike for a ride to see how she feels about it.

Big thanks to Brody & Simon at Great River Harley-Davidson for all of the amazing test rides. It was a lot of fun & very interesting to learn about some of the different styles of bikes they have available.

Don’t forget, they’ve got a ride this Sunday(10/17) that leaves the store around 10am & heads to the Rockton Bar for their Chicken-Q. Find out more about this ride here. 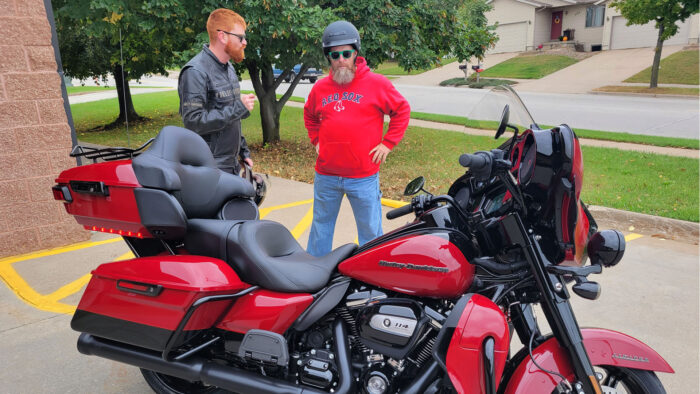