Check it OUT! It’s a Purple Fan!

It’s a Purple Fan! Sorry if you arrived here thanks to the hashtag. It’s seriously just a purple fan. This post has nothing to do with the Vikings. I mean, I DO love the Vikings, but this is all about an actual cheap appliance and not the football team.

My wife is a “fan sleeper” – She claims that she cannot sleep without the sound of a running fan. I call $#@%$#@% on that. The woman can fall asleep anywhere, anytime, in any situation, without any assistance whatsoever. It’s infuriating. But that’s an entirely different story, and since I really don’t want to get divorced today… I’ll just get back to the point.

We’ve had a box fan in our bedroom for the better part of a decade. It totally works, but the switch was broken meaning you had to either unplug it, or use a butter knife to adjust or switch it on/off. So, I looked up the part on the interwebs and discovered something that, I can only describe as, completely ridiculous.

FIFTEEN BUCKS FOR A SWITCH WHEN A BRAND NEW FAN IS ONLY $19?!? So I did what any rational human being would. I threw the old one in the alley. Some scrapper will pick it up, and recycle or harvest the goodies. The world is a glorious place.

So now what? I bought a new fan. A PURPLE fan. I never intended to actually buy a purple fan, but it was the only one they had left. Apparently fans are not in high demand in August. Who knew?

So I take the fan out of the box. Plug it in. Turn it on. aaaaannnd WHAM!

A virtual hurricane formed in my basement. This thing is inSANEly powerful. It’s was on the lowest setting and it blew over the dog. The little dog, but still. (Sorry Ziggy) Plus this thing is LOUD. Like, seriously loud. My bedroom now sounds like an airline hangar. I wish I was exaggerating, but just to be sure, I went outside and could still hear it. And that was on TWO.

I’m actually afraid to turn it up to three. It might peel the paint off. I mean, all of our stuff on the walls is under incredible duress. There is an actual dog hair tornado at the base of our bed. It’s been raging since Friday.

I’m honestly concerned about our safety. I had to put a brick behind the thing because it was literally propelling itself backward across the bedroom floor.

My wife? LOVES it.

I may have to relocate upstairs if I ever want a wink of sleep in the future. Hell, I already spend almost every waking hour working in my daughter’s bedroom… and she does have a bunk bed… soooo…

I could also re-wire it. Maybe reduce the power of the fan motor? But with my luck, the damn thing will gain sentience and start attacking me for messing with it’s core programming.

On second thought? I think I’ll just ask if she needs a roommate. #PurpleFan

Puck is a life long Vikings Fan, so yeah #PurpleFan, and sometimes he struggles with the fact that his wife can fall asleep so easily. But she also makes great coffee, so… fair trade? Check out Puck LIVE (from his daughters bedroom) during the pandemic from 10:00-2:00 weekdays. Listen Here 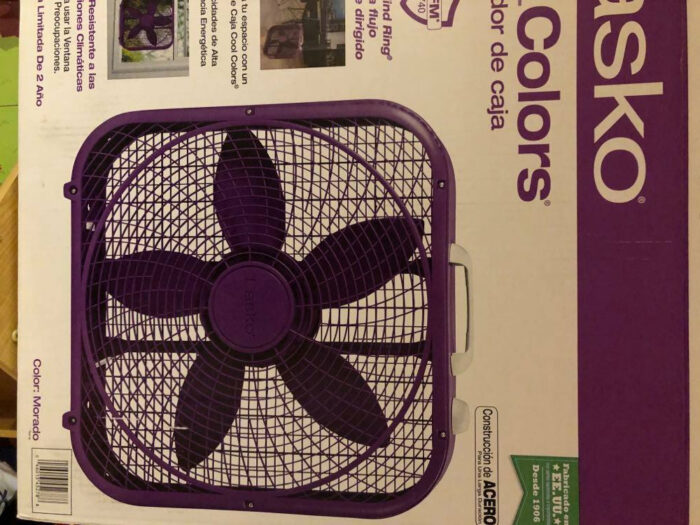