Would You Jump Off a Cliff?

When I was a kid, we spent a lot of family time traveling. Camping. Fishing. Hiking. Swimming. Lakes. Rivers. Cliff Diving (sort of)

Lakes and rivers were a BIG part of our youth. My entire family lived in St. Paul. We were “city kids” although most of us grew up with a passion for the outdoors and especially water.

Taylors Falls – St. Croix Falls and Interstate State Park is one place I will never forget. We had skied Wild Mountain a few times, but we had never been there during the summer. When we arrived, the first thing we did, was head to the Mountain and went down their Alpine Slide (you should really do this) It was awesome when I was 12.

Next? Hiking on the MN side. My parents teaching us about glaciation, checking out the glacial potholes (below) then a picnic on the WI side at Interstate.

It was about 99 degrees. Lunch was ignored. The beach was calling.

We were in the water for about 10 seconds when we saw a kid fall off the cliff into the river. But he didn’t actually fall. He jumped.

Instantly found a trail, climbed up the side of the rock, looked down, and JUMPED! I was about to jump again, when an adult came sailing over my head and hit the water. It scared the crap out of me, but then thought, “I can go higher?”

I did. The people up top said that it was about 100 feet to the water. A guy in a Rolling Stones T-shirt said: “Be careful. You gotta run at this one. Watch out for the rock!” then took off and jumped.

I looked over the edge, but didn’t see any rock. So I asked: “Where’s the rock?” Another guy said: “Oh. It’s underwater”

After watching about a dozen jumps to build up some courage (and to see where they are landing) some dude tried to do a back flip. Landed FLAT on his back.

Welp. THAT was enough for me. That SMACK echoed through the entire river valley. The “OOOOOOOOOHHHOOOOO” from the spectators and fellow divers could be heard for miles. But, thankfully… this guy did surface. He swam back to the beach and just laid there for what seemed like forever. I really wanted to jump. Until that moment.

I climbed back down to the 40 foot rock outcrop, and jumped in the river about a dozen more times, until I heard my dad yelling: “get off’a that thing. Let’s GO!”

The 100′ jump was never meant to be. I always wanted to go back and try it again, but that SMACK is all I could remember. Cliff ‘Diving’ was awesome. Although I never actually dove. It should be called cliff jumping.

Oh, and it’s TOTALLY ILLEGAL. So don’t do it. It’s really dangerous. Simply can’t say this enough: It’s REALLY dangerous. Seriously. People have died. Including someone the very next summer.

I heard that he hit the rock.

Puck is, or at least was, an adrenaline junkie in his youth. He got older. And smarter. You can hear him LIVE (from his daughters bedroom) during the pandemic from 10:00-2:00 weekdays. Listen Here 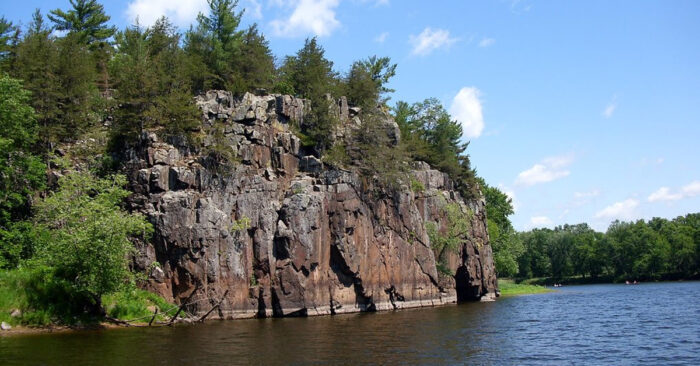