This past Saturday, I….along with twenty other thirsty humans, boarded a Ready Bus headed for Rochester, MN to visit a few breweries.

My wife & I have actually been to the three breweries we were planning to visit several times, but we were still very excited to try some new beers & sample some of the food! Plus, we met up with some friend of ours that live in the Rochester area that we haven’t seen for awhile.

Our first stop was at Forager Brewery. They opened right at 11am and were well prepared for our visit! Eleanor was our server and she did a fantastic job getting all our beers, keeping our checks separate, and adding additional purchases after we’d already received our checks.

One of the owners of the brewery was also on hand to provide tours for our group…and even though the brewery is a bit small, there was a lot to see & learn when we got there. Very informative, especially when it comes to their company concept, and the interesting laws regarding breweries & craft beer in Minnesota. Big thanks to Austin for being there & giving our group a better look at your operation.

When I went to the Forager website last week to take a look at the beer & food menu, the first beer that I saw was a 13.4% barrel-ageed, imperial stout named “Au Revoir”. It was fantastic! Not too boozy, not too sweet & cloying, well balanced and extremely smooth. Those big, barrel-aged beers can be tricky! Also had a Festbier, and we tried one of their amazing pizzas – the “5th & Madison”.

Some of our group ordered nachos, sandwiches, soup & salad…and everyone was raving about the food. So, we’re definitely looking forward to heading back to Forager in the future. FYI, they also have a small coffee shop attached that you should check-out!

Next up, we took the short ride to the Thesis Beer Project. Love this place! Adam, the owner, met us as we showed up & hooked-up everyone on the bus with one free pour & a brief tour of the facility! They have a wide variety of styles on tap, including some sours, a schwarzbier(which I tried, several times!), some hefes, IPAs, and more! Nice to visit a brewery that has something for everyone on the menu!

My wife & I actually went there before the remodel, so it was cool to see the new stage for music & comedy, along with the expanded outdoor patio. I’m sure that when the weather is warmer, that’s a great spot to chill & enjoy a beer! Plus, the place was absolutely spotless! They definitely take pride in their building & appearance by keeping it clean!

I went with the Outfly, which is their schwarzbier…and the Plot Armor, a really nice, sweet red ale! They’ve got it on a traditional tap or a nitro tap!

They’ve got a ton of board games to keep you occupied, plenty of seating, some various snacks to munch on, and a massive TV for all the sports you can manage. Plus, they have a ton of local music on their calendar, and they also host yoga, comedy & have food trucks during the warmer months. It’s good to see a business thriving after they opened their doors just a few months before the pandemic shut the world down.

After Thesis, we stopped by LTS Brewing Company for a couple of beers before hitting the road back to La Crosse.

The taproom at LTS is a bit small, but they do have a heated, enclosed tent that you can enjoy, and during the warmer months, they’ve got plenty of outdoor seating.

Like the other two breweries, LTS has a really nice selection of beers on tap, from dark & roasty, to hazy & bitter. Plenty of options to choose from! They also offer craft sodas that they make on-site! And even though we didn’t order any, I did try a piece of someone’s pizza and it was DELICIOUS!

There was a bit of miscommunication between the brewery & our bus trip, so the beertenders weren’t expecting us when we arrived, but they both did an absolutely phenomenal job serving everyone in the group! As a former bartender, it’s never easy to serve 20+ people who show up at the same time, let alone 20+ people who show-up unannounced! But they did a fantastic job, so big thanks to them for being understanding & accommodating.

I went with the oatmeal stout, which was dark & creamy…nice & toasty! A great beer for the cold weather! They also have a bunch of board games to keep you & the kids occupied while you visit, and there was also a local craft fair at LTS that afternoon. Plus, they have plenty of crowlers to take with you when you find your favorite beer on the menu!

Big thanks to Dan the bus driver Man for getting us to Rochester & back safely! The roads were a bit slick in the morning, but he did a sensational job, as always.

If you’re headed to Rochester at some point to check out the brewery scene, there’s also Kinney Creek Brewery & Little Thistle. Been to both of them before & they’re definitely worth the stop! Unfortunately, we only had enough time to hit three breweries on this trip!

Overall, I think everyone had a great time on our excursion & enjoyed some wonderful beers, delicious food, and great conversations along with a few laughs.

Definitely looking forward to our next bus trip! 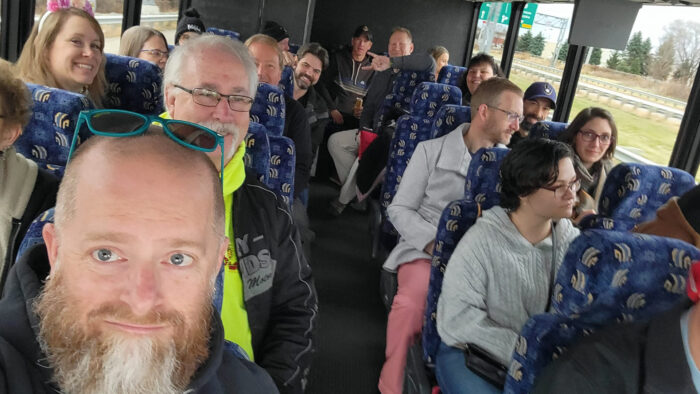