Our trip to Miller Park!

As I’m sure you heard last week, the wife & I scored tickets for opening day at Miller Park and decided to make a weekend out of our trip to the big city.

We left right after I got done with the show on Thursday and made our way to Cream City. Not a lot of traffic at that time of the day, even when we got closer to Milwaukee.

Thankfully, we were able to check into our hotel before the game, so we could unload the vehicle & take the free shuttle from the hotel to Miller Park.

Big thanks to Dave from the Best Western Milwaukee West! Dude was SUPER nice and accommodating!

The game was great(obviously), and it was awesome to be in the stadium, drinking a beer & eating a brat. Plenty of people were drinking in the parking lot & in line while waiting to get into the stadium, but I didn’t see any traditional “tailgating” going on.

Getting through the gates was relatively easy, with no additional steps like a temperature checks or a questionnaire. Just walk through the metal detector, scan your ticket, and you’re on your way.

However, the line for the craft beer oasis was a real pain in the ass. They need to get a light system or figure out some way to alert people in line that the bartenders on the far end of the counter are available. Usually, you can get through the line there in a few minutes, but we only went through once because it was taking upwards of 10-15 minutes to get a beer. Definitely frustrating. Hopefully, when we go later this year, they’ll have figured out a fix for that situation.

I would suggest pre-pouring some of the more popular beers to alleviate the wait time, and adding a red/green light to alert the people who are next in line that they can move down the bar & place their order. Might also be a good idea to try & offer some of those beers at other places in the park. It’s big enough in there to have a second or even third location!

Almost everyone walking through the concourse had masks on, and we didn’t have too much trouble with the usher/security guy on the Johnsonville deck. We were kinda hanging out with some other people from Midwest Family Broadcasting, talking & drinking without our masks on & he came over once to let us know that we need to keep our masks on unless we were sitting in our seats & drinking/eating.

The one thing that was REALLY disappointing was the Sausage Race. Every single person in the park booed as they raced “virtually” instead of actually on the field.

NOBODY liked that at all…and it’s not the Brewers fault. This decision about who’s allowed on the field comes from above, but I didn’t see any sort of info about this on the scoreboard & didn’t hear any warning on the PA that they wouldn’t be making an appearance on the field. So it was really disappointing.

After the game, we went back to the hotel to freshen up & met up with some friends of ours for a beer or two before calling it a night. 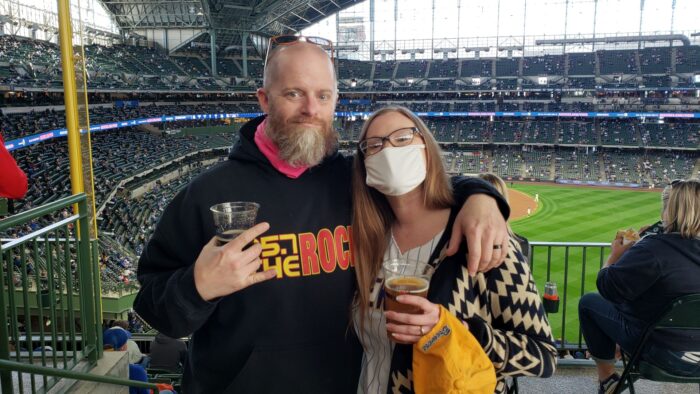